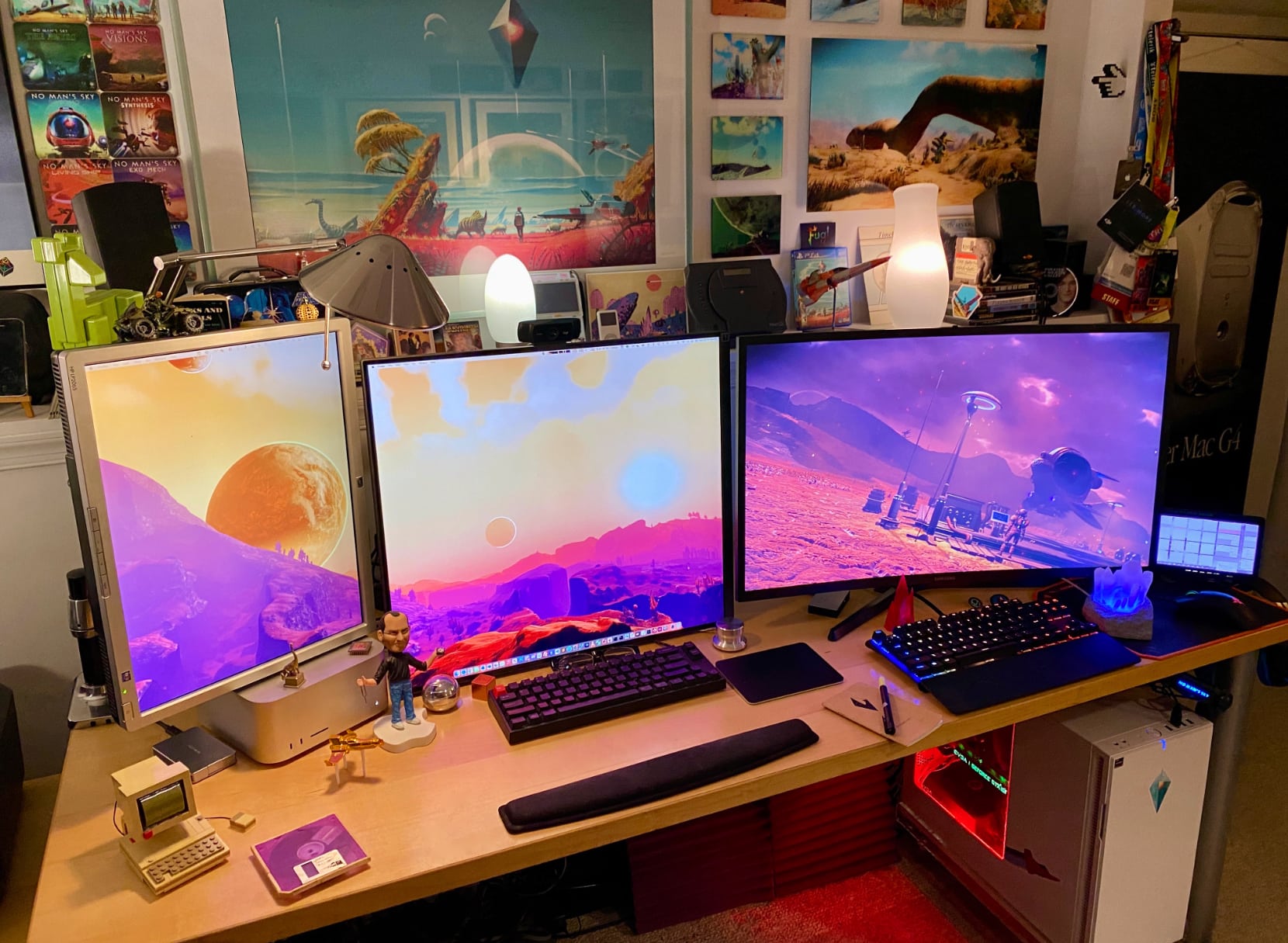 Back on launch-day in August 2016 I began playing No Man’s Sky on the PS4. I fell so wildly in love with the game that a few weeks later I ordered parts and put together a gaming PC so that I could play No Man’s Sky at 60+ FPS with higher resolution options and also have the ability to adjust the player’s field of view (which one could not, on console back then). I detailed the system build in a post from way-back-when, but in a nutshell, the system consisted of:

As I’d hoped, this setup ran the game incredibly well. I started using it back in “the early days” and I played on this PC a little over six years, for what’s now 3,800 hours in the game, all settings on “Ultra.” In that time, I doubled the system RAM and in order to move up from 1080p to 1440p, the GPU and display were upgraded to:

This worked out very well for quite a while but…those pesky (frequent and free) updates Hello Games keeps releasing began to take a toll on performance. (At the time of this post, HG has released 161 updates, 30 of them major.) As certain updates brought richer worlds with more details — Origins and Next Generation in particular — I noticed that framerates started to dip here and there. And, whereas a few years ago on my Freesync-linked GPU and display I had been mostly in the 80-95 fps range with very rarely a dip below 60 fps, recently when walking on worlds with particularly dense ground features, I began to see brief dips into the low 40s and occasional stuttering, even when framerates were up in the 70s and 80s. I have a little 7-inch secondary display constantly running on the PC, displaying system monitoring information from the app HWiNFO64, and I noted that the GPU was often not fully loaded, which showed me that I was CPU limited in terms of performance; the Skylake CPU was not able to keep the GPU fully fed. And so, I decided to finally upgrade the PC.

After bringing myself up to speed on the PC CPU landscape out there, and acknowledging that I don’t use this Windows PC for anything but gaming (the performance / efficiency cores proposition offered by Intel therefore not being of interest to me), I decided to upgrade the CPU to a Ryzen 7 7700X, which also meant upgrading the motherboard and system RAM to the DDR5 required by the Zen 4 architecture. I would also stay with Windows 10 Pro 64-bit. (Incidentally, this is the third AMD-based system I have built. The first was a 5×86 160MHz system from 1996, which I rebuilt not all that long ago, and the second was a K6 225MHz system from 1997.)

I posted on the Ars Technica forums asking for advice on making this upgrade and was given much helpful advice and told that if there were a MicroCenter near me (there was) I could get a number of in-store discounts, including a free 32GB DDR5 RAM kit, among others. And, so, I headed to the Fairfax, VA MicroCenter and purchased the aforementioned CPU along with an ASUS B650-A motherboard, a heatsink/fan combo, and a few other odds and ends. All of that in hand (including the free 32GB of DDR5 RAM), I headed home and opened up the gaming PC, swapping in the new parts for the old, reusing the GTX-1080Ti, the Fractal Design R5 case, the EVGA PSU, the optical drive, and my SATA SSDs. I took advantage of a $60 MicroCenter discount and purchased a WD_BLACK NVMe 2TB SSD for just $20 over the price of the 1TB unit to further increase loading speeds in the game. The core component build-out of this upgraded PC presently looks like:

If you have a local MicroCenter — by all means use it.

Here, I will note that the GTX-1080Ti is a GPU that was “too good.” Nvidia released it to the market — only shortly — based on AMD’s performance claims about their upcoming Vega architecture … that ended up being exaggerated. Real-time raytracing hardware aside, the GTX-1080Ti with its 11GB of RAM is approximately equal in performance to the RTX-2070 Super and the RTX-3060 (but with more RAM), especially with older games — I would not trade it for either. The RTX-2080 is only ~10% faster in most cases. It seemed a foolish idea to consider upgrading the GPU at this time, not to mention — I didn’t have the budget for it.

Upon loading up No Man’s Sky on this upgraded PC, I saw a world of difference. Compared to the Intel i7-6700K, the Ryzen 7 7700X‘s single core speed is 1.9x faster, and its multicore speed is 3.2x faster. With all settings still at “Ultra,” I am seeing typically 80 or so fps walking around on those complex worlds, with the occasional dip into the low 60s and am locked at 144fps in space. (Incidentally, I also play Microsoft Flight Simulator 2020 on this system and it’s as smooth as glass now.) I was, indeed, very CPU limited for my graphics settings and it seems the GTX-1080Ti has quite some life left in it despite being a five year old GPU. Happily, when I do eventually upgrade the GPU, this is a very solid platform upon which to build.

The cost for the parts that went into this upgrade came to just under $800 USD — thanks to MicroCenter. (More photos of both builds are in the full gallery.)

So, my No Man’s Sky adventure continues and I share this story to potentially help PC gamers that are seeing performance issues and wondering if the culprit is CPU or GPU. And, I certainly don’t want Hello Games to slow down their world detail upgrades. Facing those is a “high class problem,” and it’s amazing to see so very many updates to a six year old game that keep it in the forefront of 3D visual quality.