People who know me both online and IRL know that I’m a pretty big fan of Hello Games’ No Man’s Sky.

Actually, that’s something of an understatement.

I’m about 330 hours in so far (405 planets across 128 systems). I’ve been rather prolific on Twitter, sharing experiences and evangelizing the game (out of a sense that unhappy players don’t quite “get” it), I’ve been a denizen of the related Reddit subs since Launch Day (9 August, 2016) and have gained some note there, and I’ve made several posts about No Man’s Sky here since launch: A Few Words About the Best Game I’ve Ever Played: No Man’s Sky, My Skylake Gaming PC Build, Procedural Planetary Exploration Across the Decades. My wife and my 10 year-old daughter are pretty tired of hearing NMS anecdotes, I’m quite sure.

In a nutshell, it started out like this. I first heard of No Man’s Sky in the summer of 2015. The previews looked pretty amazing and, as I had a PS4, I was excited for its release. Not long after, I grabbed Elite:Dangerous, which I had been following with interest for some time, when it landed on the Mac (I wasn’t a PC guy…at the time), and was amazed by its realism. Comparatively, my impression of NMS at that point was that it would be less of a “whole scope” universe simulation than E:D; it seemed from previews that NMS wouldn’t be presenting an “I can fly from point A to point B across the galaxy without ever breaking frame” environment and I wondered if that would make for a much “smaller” experience. Months passed and I was spending time in E:D, mining, fighting, but became frustrated because the difficulty of amassing assets in order to upgrade ships was, to me, a huge barrier and I eventually lost a good deal of interest. I wasn’t having much fun and as a result I pretty much stopped playing.

Months more passed and No Man’s Sky was released. I purchased a digital download of the game for PS4 on day one and began playing. I fell in love immediately.

I recall waking up on my genesis planet and walking about the lush alien landscape in a sort of wonder. I had to make an extremely long trek in order to find the elements needed to repair my initial ship so that I could venture onward. Along the way, walking through the trees, boosting up cliff faces with my jetpack, gazing at planets hovering on the horizon, running around with the various creatures skittering about the landscape, I experience a feeling of incredible immersion and the scale of the thing reality sunk in. I could explore every inch of this massive planet if I wished. And there are over 18 quintillion planets in No Man’s Sky‘s procedurally-generated universe. My earlier concerns about NMS feeling “smaller” than Elite:Dangerous were certainly for nought.

The PS4 I played with was in my den entertainment center with a few other consoles, tied to the wall-mounted screen. After just a few days in, I wanted to get as deep into the experience as I could, so I pulled one of my Mac’s displays off the desk to clear a space in the basement computer room, bought a 32-inch curved 1920×1080 display, and plopped it and the PS4 down next to the Mac and started playing. This turned out to be a great move — so much nicer than playing from the couch across the room. I ran like this for a couple of weeks, getting up well before dawn to get some time in before heading to the office most days, and it was awesome. So awesome, in fact, that I wanted to take things farther, to get all that I could out of the game. I decided to build a high-end gaming PC specifically to play No Man’s Sky.

END_OF_DOCUMENT_TOKEN_TO_BE_REPLACED 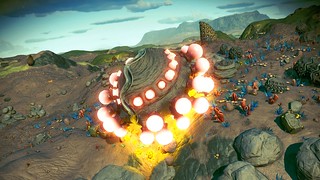 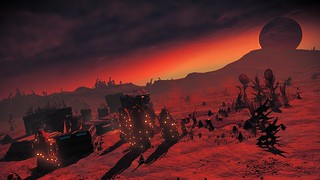